Bollywood actor Arjun Kapoor has kick-started the shooting of Raj Kumar Gupta directorial ‘India’s most wanted’.
The ‘happy and excited’ Kapoor took to his Twitter handle to announce the news with a picture of a clipboard.
“The start of a new film always feels like a mission & this time it actually is with #IndiasMostWanted. Happy & excited starting my 12th film!!! Mark the date 24th May 2019,” wrote the actor 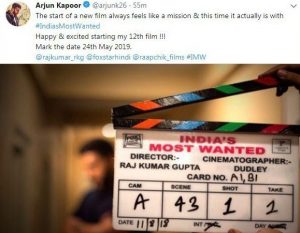 The rest of the cast for the film has not been announced yet. The movie, which is a tribute to all the unsung heroes who dedicated their lives to protect the nation, is slated to release on May 24, 2019. Besides ‘India’s most wanted’, the ‘Ishaqzaade’ star has three more films in his kitty – ‘Sandeep Aur Pinky Faraar’, ‘Namastey England’ starring Parineeti Chopra and ‘Panipat’ with Kriti Sanon