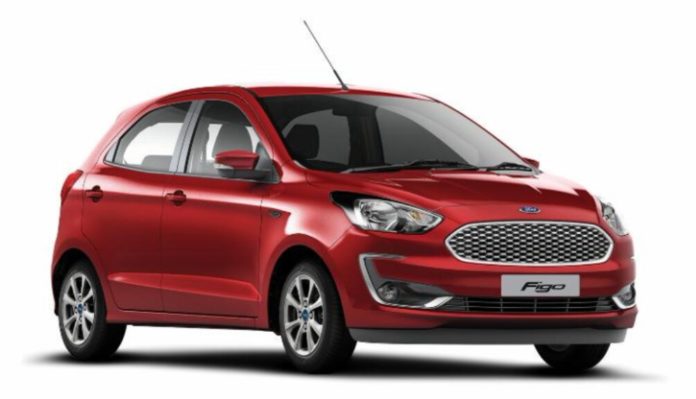 Ford India has launched the Figo facelift in India and is available across the dealerships from today.The price for Figo facelift starts from ₹ 5.15 lakh. The company says that the Figo facelift has been comprehensively designed and comes with more than 1200 new parts. There will be three variants – Ambiente, Titanium and Blu – on offer across two fuel options. The top of the line Blu variant gets a sporty cellular grille, new 15 inch alloy wheels, dual tone roof, blue themed interiors and a segment-first six airbags.

The Figo facelift will now be offered with a 1.2-litre three cylinder TiVCT petrol engine, which is light as also very fuel efficient. The engine is good enough for 94 bhp and develops 120 Nm of peak torque. In fact the company says, that the engine delivers fuel economy figures of close to 20.4 kmpl. Both these engines are paired to a 5-speed manual transmission and if you need an automatic transmission Ford has another option also .

The fog lamps are well integrated into the front bumper and will come with a chrome and Blue touch, depending on the trim. Headlamps with a black encasing add to the sportiness while the side and rear decals in the Blu trim accentuate the Figo’s stance. Inside, it gets charcoal black interiors, along with several convenience features including push-button start/stop, reverse parking sensors and camera, automatic climate control, USB slots among many others. There’s also a 7-inch homegrown infotainment system with touchscreen and built-in navigation. The 2019 Ford Figo comes with Anti-Lock Braking System (ABS) with Electronic Brake-force Distribution (EBD), and there’s Electronic Stability Program (ESP) and Electric Power Assisted Steering (EPAS) in the automatic variant.