Ishigaki Island is the commercial hub of the Yaeyama Islands, in Japan’s southwestern Okinawa Prefecture. It’s known for beaches and sites for snorkeling, diving and surfing. Within Iriomote-Ishigaki National Park lies the Shiraho Reef’s rare blue coral. In the interior is Mt. Omoto and other peaks. On the northern Hirakubo Peninsula is the Fukido River, a mangrove forest habitat.
What Ishigaki lacks in terms of man-made tourist spots, such as the shrines and temples which are ubiquitous throughout much of Japan, it more than makes up for in terms of natural beauty.
In 2009 the island received international attention when Kabira bay was awarded 3 stars by the Michelin guide. This came as no huge surprise among those who have visited Ishigaki, but if the truth be known there are other spots on the island, such as the capes of Uganzaki and Hirakubo along with the peak of Mt. Nosoko, which comfortably rival the beauty of the emerald green waters of Kabira bay.
It will come as no surprise that the internationally-recognized Kabira Bay is the most visited sightseeing destination on the island. If you have a car then a relaxing drive along the Sakieda peninsula to the lighthouse at Uganzaki also comes highly recommended. Even if you don’t have access to personal transport you’ll be pleased to know that Yaeyama’s most famous lighthouse, which is found on the tip of the Hirakubo peninsula, is accessible by bus.
The water around Ishigaki is pure blue, with white sandy beaches to soothe your senses. But don’t just stand on the beach and stare. Travellers recommend a ride in a glass-bottomed boat to gaze at the coral reefs and tropical fish from above.
More must seeing places in Ishigaki
Hirakubo Lighthouse

This lighthouse which is around an hour’s drive from the city center is one of Ishigaki’s iconic sightseeing spots, having appeared in countless magazines and guide books.

Positioned just a few miles from sunset beach you should really make time to visit this lovely spot if you’re touring the Hirakubo peninsula.
Kabira Bay

Of all the sightseeing spots on the island this is the one which is most frequently used in brochures and guide books to persuade tourists that Ishigaki truly offers paradise in Japan.

Set in lovely grounds and offering tremendous views of both the Hirakubo peninsula and the east coast of the island this is one of the most popular observation points on the island.
On a sunny day the view of contrasting blues being reflected from the ocean is quite incredible. 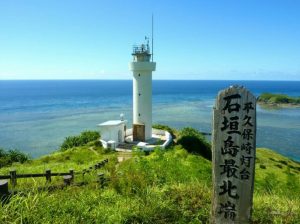 The view from Ishigaki’s western cape is one of the most stunning examples of natural beauty that the island has to offer. This is a fantastic place to enjoy a sunset and excellent beaches lie within a few minutes drive of the lighthouse.

If you have access to personal transport it would be a great loss if you don’t visit this beautiful spot. 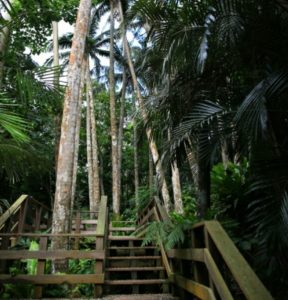 Stop off at this spot on Ishigaki’s north coast to view 10 meter high palm trees which grow from the base of Mt. Omoto.
A visit to the Yaeyama palm tree grove is likely to take in the region of 20 minutes and would fit well into an itinerary which includes other locations on the north of the island.

LToujinbaka is one of the few man-made tourist attractions on Ishigaki island. It is an intricately decorated memorial to 380 Chinese labourers who revolted against their masters when the boat which they were travelling on crashed into rocks near Ishigaki.

The site is also host to a memorial dedicated to the lives of 3 US servicemen who were tortured and killed on Ishigaki during the second world war.

You can get good accommodation in Ishigaki and the Japanese sea food which is a specialty here should be definitely tried. Take a trip to this island for a serene and peaceful trip and enjoy every bit of Japanese culture in its fullness.