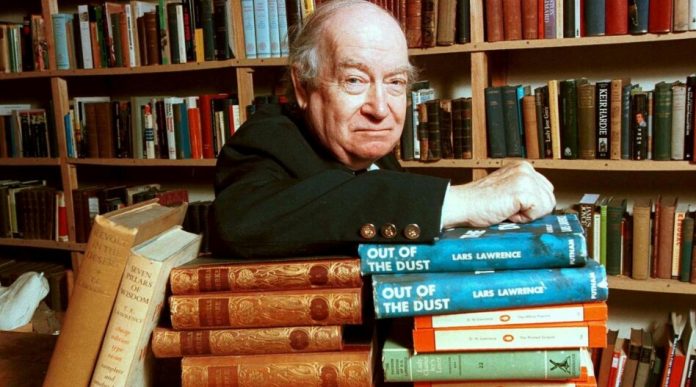 He published the works of nearly 20 winners of the Nobel Prize in Literature, including Beckett, the Irish playwright whose existential tragicomedy, “Waiting for Godot,” transformed contemporary theater.

John Mackenzie Calder was born on Jan. 25, 1927, in Montreal. His father, James, was part of a Scottish family with timber, brewing and liquor businesses, and his mother, Lucienne (Wilson) Calder, was raised by a French Canadian family with banking and distillery wealth.

Living largely in England until being evacuated to Canada during World War II, the shy young Calder read voraciously. After graduating from the University of Zurich, where he studied economics, he worked at a family timber yard but eventually moved into publishing full time in the early 1950s. At first, he put out opera annuals and a British film magazine. He gradually found his métier with publishing books critical of Senator Joseph R. McCarthy, the anti-Communist Republican from Wisconsin, and “The Question” (1958), the journalist Henri Alleg’s indictment of torture employed by French troops during the Algerian War.

He followed that quickly with “The Gangrene,” a slim book containing several accounts of torture by the French in Algeria that Calder augmented in his edition with reports of torture by British officials in Kenya. He said the British government threatened to try him for treason if he published the book.

Despite the ebbing of his power as a publisher, he continued to indulge his love of literature by opening a bookshop in London in 2001, and staging readings there. At one of them, which The Guardian described in 2002, he celebrated his publication of “The Writings of Jean Arp,” the French-German artist and poet at the center of the Dada movement.

He published many of Beckett’s novels and poems, and later wrote books about Beckett’s theology and religion. Calder wanted to be known as a publisher who would fight to protect his authors from censorship.