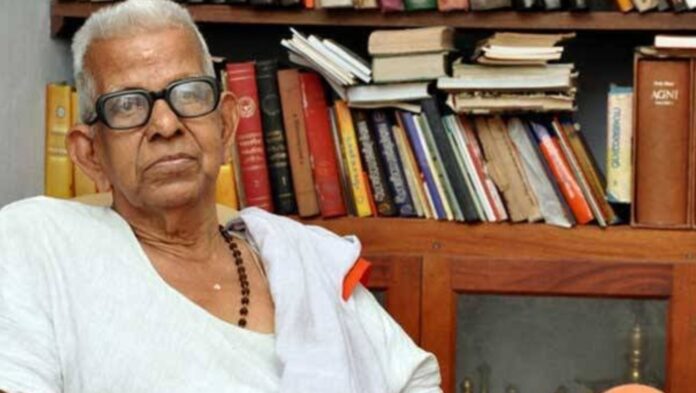 Renowned Malayalam poet and Jnanpith laureate Akkitham Achuthan Namboothiri is no more. He got involved in community work through Unninamboodiri and has been the co-editor of Mangalodayam and Yogakshema. He has been working as a scriptwriter for All India Radio, Kozhikode since 1956. In 1975, he was the Editor of All India Radio, Thrissur. He retired from All India Radio in 1985.

The late poet has written over 46 works of poetry, drama, short stories, and essays .He has published  many works including Twentieth Century Epic, Bhagavatam, The Temple of the Moment, The Marble, The Sacrifice, The Flowers of Conscience, The Selected Poems of Akkitham, The Temple of the Moment, The Five Colors, The Debut, The Honey, A Bunch of Grapes, The Fallen World, Amritagathika, The Game, After the honeymoon. The main works are Sparshamani, Five Folk Songs and Manasapooja. He has also published essays on Upanayanam and Samavarthanam.