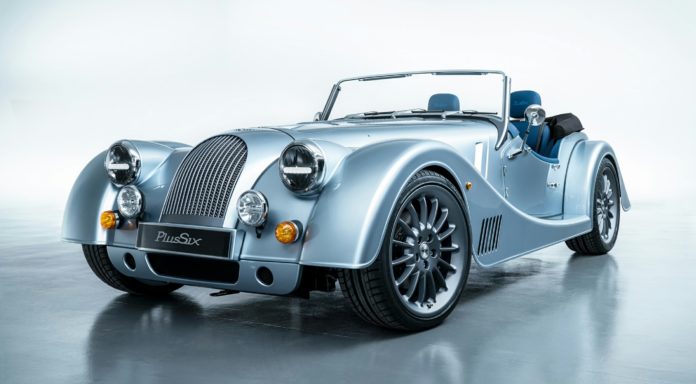 The Morgan Plus Six is a brand new car from the ground up, built on an advanced bonded aluminium platform called the Morgan CX generation. It weighs barely more than one tonne and is powered by the 3.0-litre six-cylinder turbocharged petrol engine found in the new BMW Z4 and Toyota Supra.The car is powered by a 6-cylinder engine. It generates a peak 335 horsepower and 369 pound-feet of torque and spins the rear wheels via an 8-speed automatic. The customers will get a 0-62 mph time of 4.2 seconds and a top speed of 166 mph.

The Plus Six also introduces Morgan’s new CX-Generation aluminum bonded platform. The new design features an extra 0.8 inches in the wheelbase compared to the platform of the Plus 8 and Aero 8, resulting in extra space for occupants. Torsion rigidity has also been more than doubled.
The platform also brings new technology in the cabin, including a subtle digital screen built into the new dash. Things remain very retro, of course, with the dials, for example, being inspired by 1950s’ aviation instruments. Available, and standard on some models, will be a removable roof made from composite materials to keep things light.

As a flagship, the Plus Six is positioned at the premium end of the Morgan product range, sitting above the existing Roadster, Plus 4 and 4/4. Pricing starts from $102,585.

Care Keys will be Introduced in 2021 Model Volvo Cars

Hyundai Venue will be Launched in India on May 21