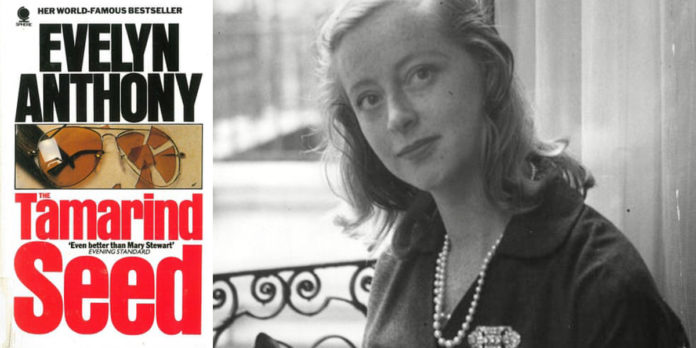 Evelyn Anthony who was a prominent feminist and author of more than 50 novels including The Tamarind Seed, which was turned into a hit film in 1974 passed away at the age of 92.

The Tamarind Seed (1971), which was made into a film starring Julie Andrews and Omar Sharif,challenged stereotypes by becoming the main breadwinner of her family and, in 1994, the first female High Sheriff of Essex in 700 years.

Her career began after the second world war with short stories syndicated to women’s magazines, she chose Evelyn Anthony as her pseudonym as, a devout Catholic throughout her life, Anthony was the patron saint of lost things.

In 1953 she published her debut novel, Rebel Princess, a fictional account of the life of Catherine the Great. Her other books Anne Boleyn (1956) and Victoria (1957) were both selected for the US Literary Guild award. Evelyn produced nearly a book a year for more than 40 years, not even slowed by the birth of her six children between 1957 and 1965.

In the 1960s Evelyn switched to spy thrillers, having spotted a gap in the market for such books that appealed to women. It was then the height of the cold war, and with titles such as The Assassin (1970) and The Grave of Truth (1979), she was a regular in the bestseller charts. The Occupying Power won the 1973 Yorkshire Post book prize and the following year the film of The Tamarind Seed became a box office hit, with Sharif playing the Russian spy and Andrews the British civil servant, lovers divided by the iron curtain.

Born in London to Elizabeth (nee Sharkey) and Henry, Evelyn was a voracious reader. She escaped a troubled family through reading and storytelling  and a boarder at the Convent of the Sacred Heart school in Roehampton, she would terrify girls in her dormitory with ghost stories.

In later life she concentrated more on her charitable work. She felt a debt of gratitude towards second world war veterans, and did much for their causes. In 1987 she was made a freeman of the City of London alcoholism and addiction.

Evelyn almost stopped writing for seven years after her personal tragedy of her daughter’s death . Her last book, Mind Games, appeared in 2005, a year after the death of her husband from a stroke. She has won a huge fan circle through her writings and she had the blessing of getting mails from fans around the world till her death. She will be remembered as an enthusiastic and systematic writer for ever.