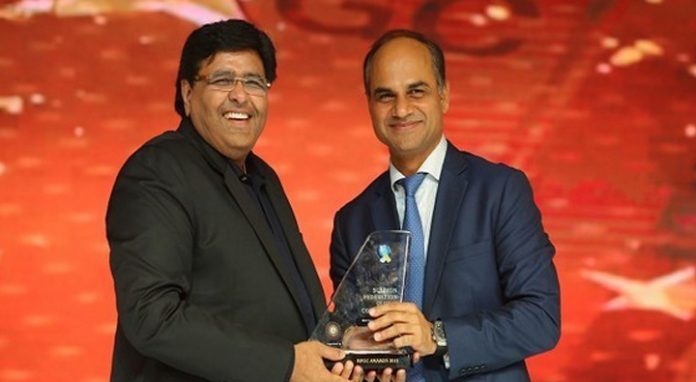 The past month has been phenomenal for India’s largest bullion company RiddiSiddhi Bullions Limited (RSBL). It has picked up three prestigious awards at two significant bullion industry events. The first two were at the Bullion Federation Global Convention, held at New Delhi’s swanky JW Marriott on July 28 and 29, where RSBL was conferred with the title of “Best Gold Seller in India – 2017-18” and “Best Bullion Dealer in India – 2017-2018”.
This is RSBL‘s second year of winning the “Best Gold Seller in India”, after being presented with the same for the year 2016-17.
The third award was the “Best Gold Bullion Dealer of the year 2017-18” that RSBL won at the India International Gold Convention 2018 held at the IIGC Excellence Awards from August 3-5 at Le Meridien, Kochi. This was RSBL’s hattrick at IIGC Excellence Awards, having won the honour in 2016, 2017 and now again in 2018. RSBL‘s MD, Prithviraj Kothari was there in person at both events, to receive the award on behalf of his company.
Founded in 1994, RSBL is one of India’s top bullion companies and has been a market leader in the wholesale and retail level deliveries in the spot, forward and futures market. With a combined leadership experience of 100+ years, RSBL has consistently featured in Business Standard 1000’s list of India’s Top 10 Unlisted Companies. The ISO 9001:2008 certified company offers numerous products, including the RSBL-administered eCoins. RSBL is also an Authorized Participant and India’s largest creator and redeemer of Gold Exchange Traded Funds.
This is Bullion Federation’s third annual convention that was attended by all industry stalwarts. It brought together all major stakeholders including miners, refiners, bullion dealers, importers, exporters, traders, retailers, banks, nominated agencies, financial institutions, logistics providers, and policymakers.
The 2-day conference opened with an inaugural speech by Hon. Giriraj Singh (MoS for Micro Small and Medium Enterprises). Over 2 days, there were invigorating master classes, panel discussions signature sessions curated to enhance a productive exchange of information.
The IIGC in Kochi had over 400 participants from the world’s most prominent names in the bullion industry including bullion banks, nominated banks, and international refiners, leading jewelry manufacturers and official trade representatives from Canada, Singapore, Peru, Ghana, Liberia, and Myanmar. The event was inaugurated by Senthil Nathan S IRS – Deputy Secretary, Ministry of Commerce.
Prithviraj Kothari, MD – RSBL said, “We are absolutely honoured to win 3 titles consecutively in a months’ time. We were awarded the “Best Gold Bullion Dealer of the year 2017-18” title for the 3rd time in a row, “Best Gold Seller in India” title for the second year in a row along with the “Best Bullion Dealer in India”.
“For more than 24 years, RSBL has led the way for Indian bullion companies with innovative products, honest practices, enabling transparency and leveraging technology for taking gold and silver products to the deepest corners of India. I accept this award on behalf of our very dedicated team and visionary leadership that has paved the way forward for the bullion players in India. We thank the Bullion Federation for the honour and their relentless work for the industry!” he added.
In the past, RSBL has won numerous industry felicitations such as Golden Arm (MCX), Best Bullion Dealer (IBJA), Emerging India (CNBC) and EPCES Export Awards (GOI). With their sheer hard work and dedication, the company endures to bag many more awards and recognition in the future.