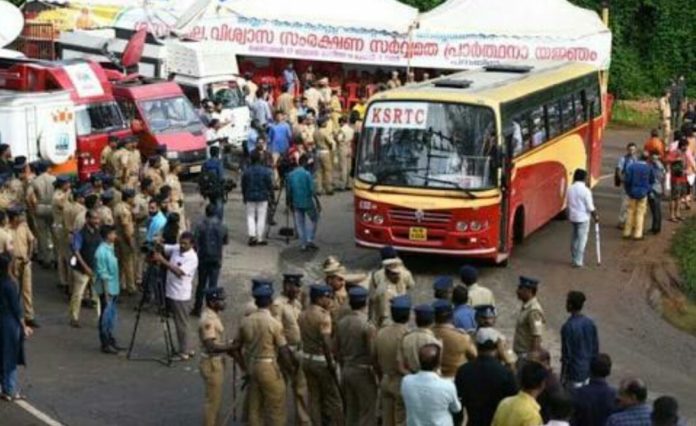 Sabarimala: Today the secular India has witnessed a very pathetic scene of Hindu God Ayyappa’s so called devotees attacking people, press , police and turning the premises into a battlefield. The recent Supreme Court verdict permitting the entry of women of all age group to the Sabarimala temple has created uproar among a section of the Hindus . In fact who are these devotees? If they are true devotees they can never indulge into these type of violent activities. One thing is clear that the verdict has come as a blessing in disguise for the political parties as they can use it as a political weapon to blame each other in the coming elections. But now the incidents happened in Sabarimala have crossed the limits and the political parties including BJP and the Congress are to be made responsible for instigating communal violence among the people. Now at least the political parties should realize that these type of dirty game will not work with the voters. India is a secular country and especially Keralites are far more better in the area of literacy. Any one can make out that today’s scenes were pre – planned and happened in the expected lines. Why didn’t the Kerala Government foresee this? Many women journalists and crew members of national and regional media were attacked . It was the duty of the Government to give sufficient protection to the press who were on duty there. More over some women who came to enter the temple were sent back. We are again and again witnessing the Government’s inaction by letting the women of the state down. The state government should have taken sufficient precautions before venturing into the implementation of the Supreme Court verdict. Handling such a sensitive issue with a few number of police force and retaliating at the fag end was a failure from the Government’s side. Situation would have been much better if adequate steps were taken before opening the Sabarimala temple for the devotees. Now at least the Government should act by bringing the culprits to the law and make sure that no such incident will take place again.