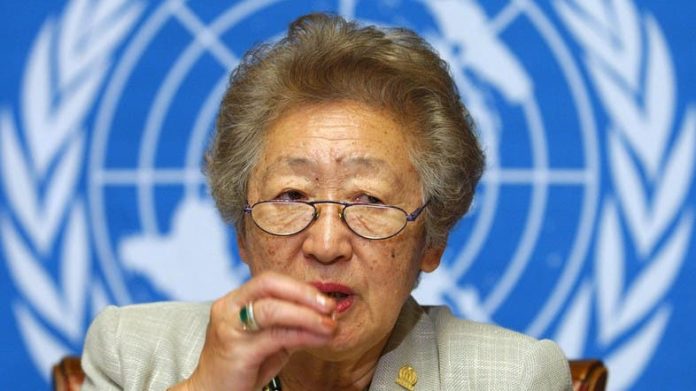 Sadako Ogata, the first female head of the United Nations refugee agency has become a memory. When Ogata took up the post at the headquarters of the United Nations High Commissioner for Refugees (UNHCR) in Geneva in February 1991, staff knew almost nothing about her. First impressions were that she was too quiet, too self-effacing, too timid. There were doubts about whether she was up to the challenge of running one of the world’s biggest humanitarian organisations.
The scepticism was partly because she was a woman, at a time when few occupied senior UN positions. And she was Japanese, from a culture unfamiliar to many of the staff. Moreover, in an organisation dominated by career bureaucrats and former political leaders and foreign ministers, she was from the academic world, a professor of politics and international affairs.

She proved to be the strongest woman to handle the refugee issues when she personally attended the refugee issues after the Gulf war. From Iraq she flew to Iran and Turkey to seek their cooperation, and succeeded. She was quietly spoken and courteous in negotiations but direct and persuasive. She made an impression on the Tehran Times, which described her–she stood at just under 5ft–as “the diminutive giant”.

Ogata is rightly remembered for having broken the gender barrier at a major UN agency. But just as important a part of her legacy is that she transformed UNHCR, expanding its role to help millions more refugees.

The Fall of Berlin Wall’s 30th Anniversary Celebrated in Germany