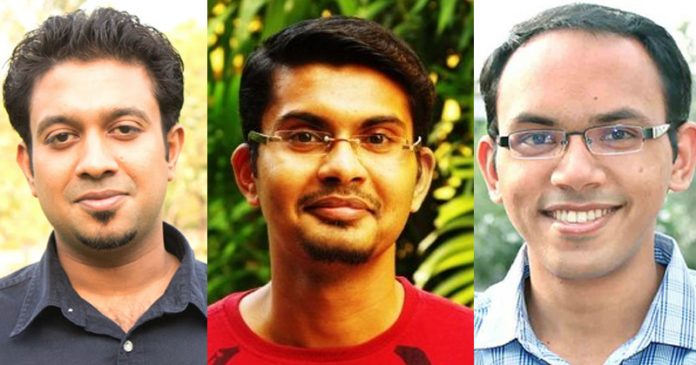 Startups are the current the fad in Kerala. As the mobile phone market is growing and is poised for further leaps ahead startups are likely to earn big bucks.

A lot of young techies who have ventured into the startup space has proved their mettle by tasting success here. And it is interesting that many startups have a story of friendship at the centre of their origins.

Friendship is also at the core of the success of Foclaoid Technologies, a digital solutions providing company based out of Bangalore, Cochin and Trivandrum. The founders of the company—Anish Prakash, Prasobh V Nair and Venkat Ramakrishnan—share a camaraderie that inspired the origin of Focaloid.

Focaloid was initially conceived as a social media platform for photography enthusiasts. It operated like a platform for professional as well as budding shutterbugs where they could get together post their works and share ideas.

The concept received instant acclaim and Focaloid was incubated through the iAccelarator program in CIIE – IIM Ahmedabad. It was identified by Microsoft as an emerging Company and was invited to the Microsoft Bizspark Plus program.

The company, in its present form, was formed on January 23, 2013 and engage in creating customer-centric applications on multiple platforms in mobile and web. Focaloid can proudly boast of associating with big brands like IBM, Deloitte, Maersk, HCL, Axis Mutual Funds, VEST inc., Varroc etc.

Venkat Ramakrishnan is the CEO of Focaloid Technologies holds a Postgraduate Diploma in Management from Indian Institute of Management (IIM) Ahmedabad and a BTech in Electronics & Communication Engineering from University of Calicut.

Prasobh V Nair,CTO, holds a B.Tech in Electronics and Communications Engineering from Mahatma Gandhi University, Kerala. Previously, he was involved in software development at Infosys and has successfully lead project teams for various clients including Verizon Technologies,etc

Anish Prakash ,CMO, has successfully handled technical and management roles in Robert Bosch, Ogilvy & Mather and Wipro Technologies. He holds a Masters in Business Administration from NITIE, Mumbai and a BTech in Electronics & Communication Engineering from Mahatma Gandhi University, Kerala.

SPS ASSAY AND HALLMARKING – The pioneers in hallmarking