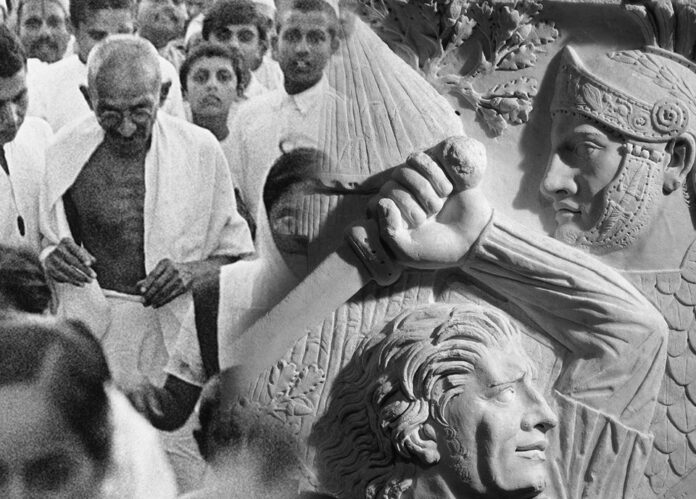 In this hour of crisis in Afghanistan, no one could have imagined that Gandhiji and his path of non-violent protest could ever be relevant.

The Taliban’s procession has started carving its space in the news for the last few days. But falling of the main cities of Afghanistan and eventually the capital Kabul under the control of Taliban in such easy way was unimaginable a few days ago.

The Afghan army and administration surrendered to the Taliban without fight. The President fled the country while taking measures for his own security and leaving his people in despair. Images of people rushing to leave the capital, eager to make some way in the plane and the human body falling from the flying plane is enough to give glimpse of anarchy in the city and panic in the mind of a common man at the moment.

Keeping in view the past records, there is no need to explain the brutality and horrors of the Taliban, and also no need to explain that the prime victim of Taliban’s rules and customs will be the women and religious minorities, who are actual vulnerable in the present situation there.

In such a situation, news coming from certain quarters are hope of tomorrow. The first news is that a priest of a Hindu temple in Kabul refused to leave his temple and the country for fear of the Taliban, saying that even if the Taliban killed him, it would be in service to the God. The second news, which surprise us, is that in the afternoon on the street of Kabul, seven women suddenly stand in front of the media holding placards in their hands to protest the policies of the Taliban. This tended the Taliban to release a statement regarding safety and security of women in their regime within the realm of sharia.

Although it is not big achievement but undoubtedly it is a remarkable shift.

Point of consideration is that in such an environment when the armed forces have laid down their arms, the administration has bowed down, then what is that energy, what is source of power which tend to stand those on their turf who are considered weak and vulnerable in comparison to the ruthless terrorists. To me, it is certainly the “truth” & “righteousness”. And this is nothing but the real basis of Gandhian philosophy which suggest to stand by your truthfulness, righteousness even in a very intimidating atmosphere, without fearing the tyrants.

Further in the last 20 years, the world has witnessed the armed resistance and use of weapon by the World’s superpower to stop, eliminate, the Taliban. But after slight disappearance of military power, Taliban again stood up with full strength. Even the President of that Superpower America has conceded that resisting Taliban is up to Afgan people and their leadership and America is not going to fight war of others.

In such a situation, only two options are left in front of civilians who cannot fight the Taliban with military power as on date:–

First, to adapts to the policies and rules of the Taliban and sees themselves and their nation going down. And the other way is to follow the path shown by Gandhiji. The Women of Kabul have marched on the path by defying the dictums of Taliban on streets of Kabul without fearing the power of the tyrants. This resembles the same seed which once upon a time Gandhiji inseminated in Africa and then in India, in the mind of people trapped in the shackles of dependence and bondage. There is a hope that if the people of Afghanistan show the courage to follow this path, then perhaps the sun of peace and humanity could rise in future. That the Taliban will bow down, change and could be defeated.

And for these reasons, I am pleasantly surprised that in such an atmosphere of war, inhumanity and barbarism, even in these horrors, Gandhiji and the path shown by him are relevant.