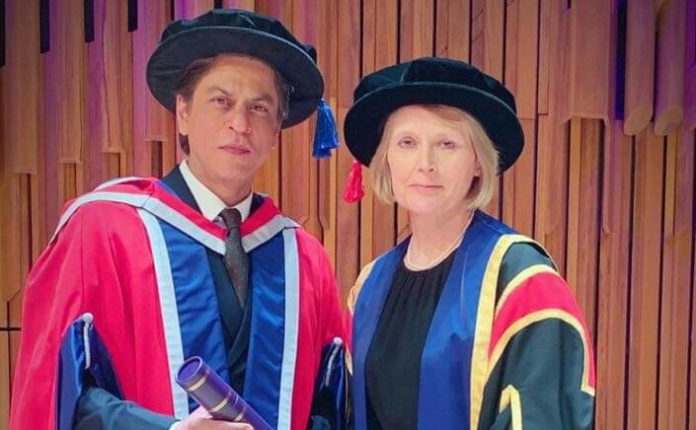 Bollywood superstar Shah Rukh Khan is honoured with doctorate from the university of Law London for his philanthropic activities. He has carved niche for himself around the globe for his good gestures .Whenever he attends a public function he steals the show with his speaking skills. He had already received honorary doctorates from the University of Bedfordshire and the University of Edinburgh.

The actor received the doctorate during a graduation ceremony for more than 350 students that was held at the Barbican in London on April 4. Having appeared in more than 80 Bollywood films and SRK owns Red Chillies Entertainment, Redchillies VFX and colour, a leading film studio along with a cutting edge VFX studio in India. He also co- owns global sports franchise titled Knight Riders with cricket teams across India, South Africa, and the Caribbean.

Shah Rukh Khan became the brand ambassador for India’s many Human rights campaigns, including Pulse Polio and National Aids Control Organisation, as well as worked closely with several charitable foundations including the Make-a-Wish Foundation. Shah Rukh was honoured with the Crystal Award for his work towards acid attack survivors at the World Economic Forum 2018 held in Davos.