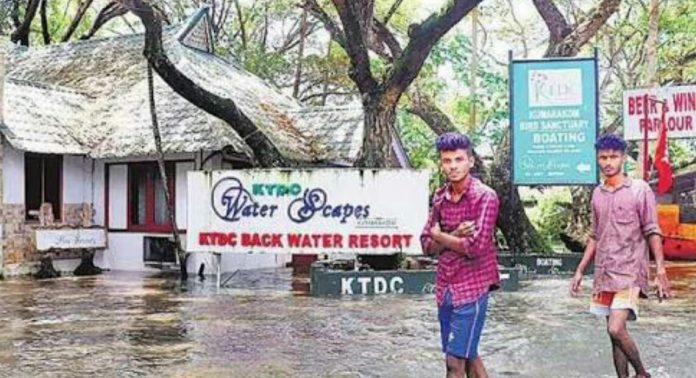 Come the tourist season and the flood devastated Kerala will have to pay a price for its main income generating sector. Livelihood is set to be a big challenge for Kerala in the coming months, with the floods having taken a toll of the ₹ 30,000 crore tourism sector that accounts for 10% of the state’s gross domestic product (GDP) and employs around 1.4 million people.

The districts of Alappuzha, Ernakulam, Idukki, Pathanamithitta, Thrissur and Wayanad, which have been most affected by the floods, are also among the top tourist destinations of Kerala.
Unprecedented rains and floods in Kerala will have sharp and significant economic consequences and will adversely impact tourism, which is one of the state’s core industries, analysts at CARE Ratings said in a report. The credit rating agency also said that Kerala’s finances could take a hit, with the state’s gross domestic product being affected by up to 1 percent because of the unfortunate situation.
“Lower spending levels during the festival of Onam will impact the consumer goods industry (including auto) and gold. Growth in gross state domestic product (GSDP) can be affected by up to 1 percent,” they wrote.
CARE also estimated that employment of nearly 4.13 million individuals in these districts has been affected on account of the deluge and the resultant disruptions.”For the 4.13 million affected working individuals in the five regions, it may be assumed that 20 percent are NRIs. Hence around 3.3 million workers would have their employment in jeopardy,” the brokerage said.
CARE estimated a wage loss of around Rs 4,000 crore for August (based on the average wage rate of Rs 400 per day for Kerala, according to data available in the 2017-18 annual report of the Ministry of Labour).
Kerala sees a huge demand for MICE (meetings, incentives, conventions and exhibitions) activities during April-June and October-March for tourism and social activities. Onam falls in the September quarter, which leads to a high influx of tourists in the state.
“The state had witnessed a fall in MICE tourism due to the liquor ban imposed in FY18 as this led to a shift from Kerala to Sri Lanka and Thailand. In FY19, tourism has already been affected due the Nipah virus, now with the floods; a further fall in tourism is expected for around 6-7 months as the state recovers during the peak tourism season,” CARE said.
Kerala’s financial position has been strained over the years. The state has a high revenue deficit and has been unable to maintain its fiscal deficit within the target of 3 percent of GSDP. It also carries a high debt burden with outstanding debt of Rs 2.1 lakh crore (2017-18) or 31 percent of GSDP.
“The finances of the state are likely to be further pressured owing to the floods. While expenditure towards flood relief and reconstruction would increase, the government income could see some moderation. The revenue deficit would widen further (2018-19 budget has estimated it to be Rs 12,860 crore) and the fiscal deficit too would increase from the budget estimate of 3.1 percent of GSDP (for 2018-19),” CARE said.
CARE believes that reconstruction activity would entail higher borrowing by the households and businesses, resulting in an increase in bank credit off take and growth in the region.
Kerala has suffered a major setback owing to the floods in every sector and especially the tourism industry. It will take time for the reconstruction and rehabilitation and the tourism industry will have to find ways to bring back its lost glory.