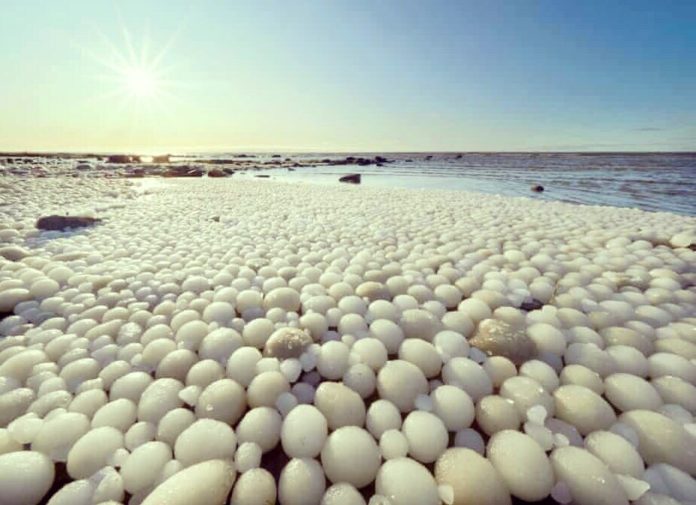 A rare collection of “ice eggs” has been spotted in Finland , a phenomenon experts say only occurs in highly particular conditions.
Risto Mattila, who photographed the eggs, said he and his wife were walking along Marjaniemi beach on Hailuoto island when they came across the icy balls covering a 30-metre expanse of shoreline.
“The biggest of the eggs was about the size of a football,” said Mattila, an amateur photographer. “It was an amazing view. I have never seen this phenomenon before.” Jouni Vainio, an ice specialist at the Finnish Meteorological Institute, said the occurrence was not common, but could happen about once a year in the right weather conditions.

“You need the right air temperature (below zero, but only a bit), the right water temperature (near freezing point), a shallow and gently sloping sandy beach and calm waves, maybe a light swell,” he said.

“You also need something that acts as the core. The core begins to collect ice around it and the swell moves it along the beach, forward and back. A small ball surface gets wet, freezes and becomes bigger and bigger.”

Autumn is the perfect time to see the phenomenon, according to Dr James Carter, emeritus professor of geography-geology at Illinois State University, as this is when ice starts to form on the surface of water, creating a form of slush when moved by waves.