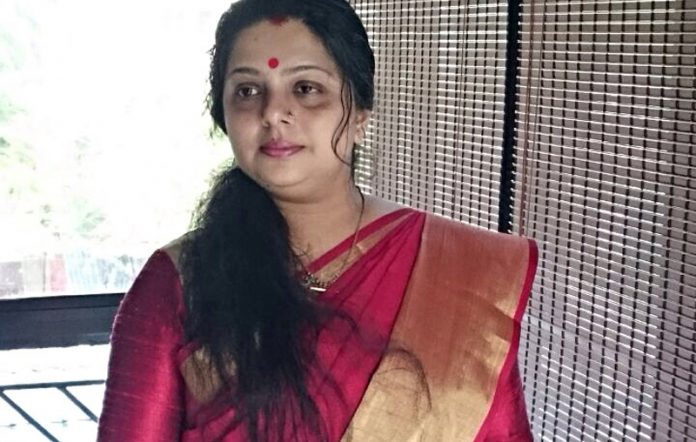 Narayani Anoop is all open about her life and success story and she shared it with Friday Mania in a very cheerful style. A true artist who has known the hardships to become a well known artist has reached the helm of dancing with her hard work and determination. She started learning dance at the age of six .Her father was paralysed and went for a treatment in Chennai. Dr K J Yesudas found the real talent in the small girl and after they returned from Chennai she started learning classical dance under Guru Kalamandalam Saraswathi ,wife of M.T.Vasudevan Nair. She did her debut performance in Bharatanatyam at the age of 12. Narayani shares her experience of  her debut performance as a blessed one as her teacher herself brought her  costume and jewellery. After that her main platform of inspiration was Providence college,Calicut where she had great opportunities to perform and her creativity took a new turn .Narayani was a regular participant in youth festivals and college competitions and also acted in a short film on career awareness.  Once she got married to Anoop, Narayani like any other woman wanted to be in the shell of married life. Later after the birth of her daughter Niranjana she was all settled with her married life. But her mother-in-law insisted that she should not sit idle and supported her to start a dance school. Narayani did choreography for many children’s programme and started a dance school ‘Punarjani’. Initially she started a summer holiday camp for children and later class for parents of students at Ladies club ,Panampilly Nagar. That was a 10-12.30 batch and that too weekly once. Narayani has pioneered the concept of dance class for housewives where usually dance is considered as an art meant only for youngsters. She took this concept as a challenge and started teaching fusion dance ,a little deviation from the original classical dance .Narayani is so excited when she talks about her achievement of bringing these housewives to the stage .They did a fusion dance of bharatanatyam, Kuchipudi and mohiniyattam. It was really a challenging experience and she received lot of appreciation for her real daring attempt. Later on Narayani had to never look back. Now she is busy with her full time dance classes and is also heading Cine actress Reema Kallunkal’s dance institute ‘Maamaangam’.

Narayani is a great artist who believes that art should not be made as business. She is of the opinion that art is a blessing and it has to be nurtured with regular practice and training. Her vision is to do lot of fusion dances on the stage .Now she has around 70 to 80 students and mostly housewives. Narayani finds pleasure in watching her students perform and helping others is a passion for her. Her selfless dedication towards dance will take her to new heights of art and we can expect lot of fusion performances from her students in the future. She is blessed with a very talented daughter Niranjana who is also a cine actress and dancer.

Artist of the week High on Music