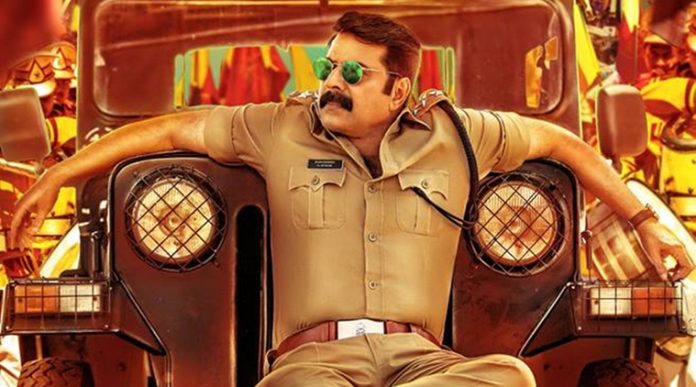 Nitin Ranji Panicker’s debut movie “Kasaba” tells the story of a police officer Rajan Zacharia (Mammootty), who during an investigation of a blast case, lands in the bastion of a criminal-turned politician Nambiar (Sambath). The rest of the story also deals with his encounter with Kamala (Varalaxmi Sarathkumar), a brothel runner, and the baddies.

Mammooty appears as a carefree Circle Inspector and it works. Though he has played a number of police characters, Rajan Zacharia will impress you with his mien. The first half will keep you glued to the screen as the film acquires a thrilling mood. Sampath and Jagadeesh are in meaty roles and they have done it well. As in his father’s films, Nitin’s dialogues are riveting.

There are a series of double entendres throughout the film intending to create laughter. And it’s far-fetched sometimes. Once the mystery behind the blast unfolds (nothing exciting though) in the initial stages of second half, the rest of the proceedings appears to be ceremonially set for villains’ decimation. The later part reveals lethargy of the writer and consequently, Kasaba ends with a predictable and lacklustre climax. On technical front, visuals by Sameer Haq are good; especially well-shot action sequences. Music by Rahul Raj is disappointing. Varalaxmi is apt for the role, but her emotions fail to exude on her face.

With a slipshod script, “Kasaba” turns out to be an average film. Watch it if you are a hardcore “Mammookka” fan.