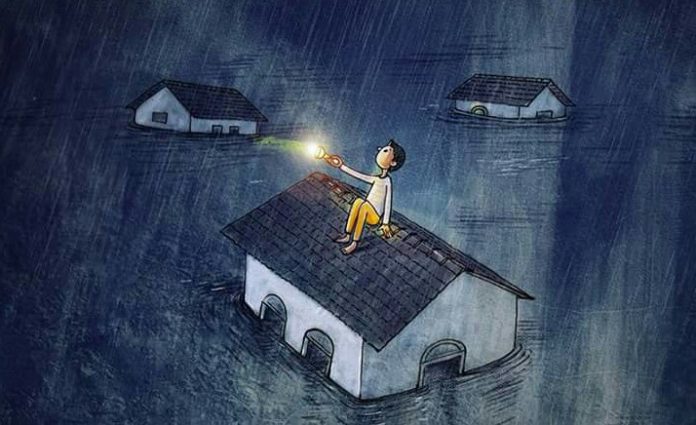 The Centre has declared the massive floods which occurred in Kerala as a calamity of severe nature and not a national disaster. Many have lost their lives in the rains, floods and landslides in the state where over eight lakh displaced people have been sheltered in 5,645 relief camps for the past two weeks. So far everything went well but how to deal with the next phase is a serious question.

We have already seen the sympathies and aids pouring in from every nook and cranny of the world . The centre has already extended a 500 plus crore relief fund which is not even a fraction of the state’s  requirement. The central government should realize that the flood which literally submerged the entire state is a severe calamity and not a simple disaster which can be taken care of by India alone. Then what is it that stops the Centre from taking the aid from the United Nations ? The government also denied the financial assistance offered by UAE . They said the government has taken a strong decision to rely solely on domestic efforts to tide over the situation. Is India that self contained to reconstruct a state ? If Centre is denying UN’s aid then the central government should take up the responsibility of  the cost for the reconstruction of the basic infrastructure which will be a wishful thinking as the state is asked even to pay the money for the rice provided by centre for flood relief victims.  This is the time the government should return with gratitude the tax the people  have paid for each and everything. At least some amount can be utilized for the welfare of a state which is devastated by a natural calamity. According to Kerala’s Finance Minister the Kerala government will need at least Rs 21,000 crore to reconstruct basic infrastructure  and will have to look at various options to meet the burden, including approaching the GST Council to allow the state to levy a cess. This is the time the state and centre should join together irrespective of any political indifferences to seek the help of World Bank and UN agencies including WHO  to take care of the issues. The farmer’s need help, the children who lost even their school books need help, the homeless need help to settle down again and the roads will have to be reconstructed. Money is the need of the hour to rehabilitate the people. The BJP has accused Sashi Tharoor of not being serious when he took up the issue of UN help in Geneva. We understand that he doesn’t have any  executive powers to do so but then who will bell the cat if the concerned authorities are turning their face against the state’s problems. Whether it’s PM or CM or Shashi Tharoor the state and the centre will have to agree on external help to rebuild this beautiful state. This step motherly attitude from the centre will only worsen the plights of the Keralites. The whole world has already seen the unity of the people and the political parties while dealing with the rescue operations. The people of Kerala  stands united in a crisis . And it’s high time the state government should demand strongly and get the things done instead of waiting for the centre to act on their own.  Otherwise it’s going to be Waiting for Godot .

Amal Hussain : The Face of Starvation Died in a Refugee...