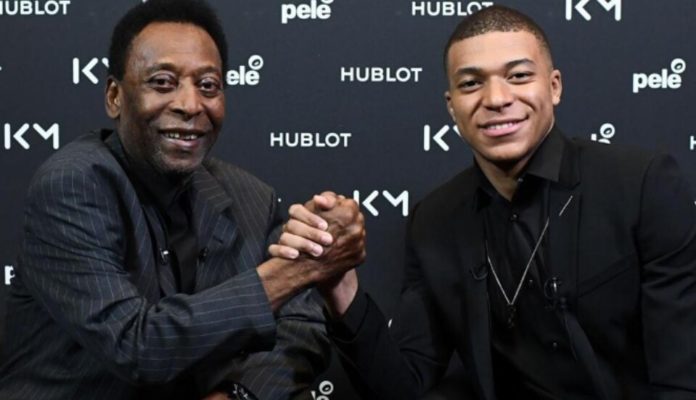 By Sreejith Kamalanayanan
Football legend Pele is learnt to be hospitalized in Paris due to urinary infection. Doctors have administered antibiotics to the 78-year-old Brazilian soccer legend.

The news about Pele’s illness has been reported by Pepito Fornos, who is Pele’s Spokesman and friend.
Fornos said the situation is stable and under control. Pele was hospitalized on Tuesday. He took part in an event In Paris with French football star Kylian Mbappe. Fornos said Pele is likely to stay in hospital for upto two days.

Fornos said doctors recommended Pele to stay in hospital for two days as he can leave the hospital fully recovered.
Earlier Mbappe had revealed his excitement of meeting the soccer great for the first time ever. He said he punched himself to ensure that the meeting with Pele wasn’t a dream.

Mbappe said he knew Pele was the football icon when he was a kid.
However, Pele didn’t use superlatives to describe Mbappe. He said Mbappe is yet to become the king of soccer. He is undergoing challenges to become the king.
Pele said Mbappe can become a soccer great even without leaving Paris Saint-Germain. If Mbappe continues to play like he is, he can become great, said Pele.

Many players have compared Mbappe with Pele. Former Arsenal manager Arsene Wenger is one among them. Wenger praised Mbappe for his combo of pace, intelligence, relaxed attitude to deal with stress.

About the comparisons Pele said both of them share the capability to resolve matches, which he describes as one of his core strengths during his career. He explains the skill as understanding and finding a solution in a second, for example, with changes of direction.