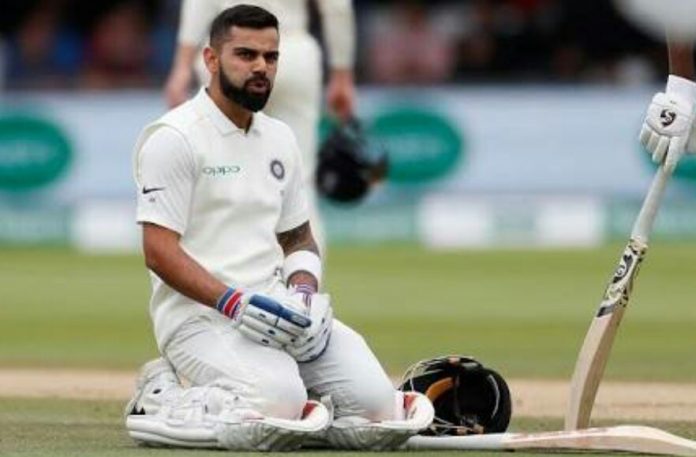 After suffering a crushing defeat at the hands of England in the second Test at the Lord’s, Indian skipper Virat Kohli has admitted that his side deserved to lose the match as they were completely outplayed by the home side.
Pacers James Anderson and Stuart Broad combined to take eight wickets as Englandcrushed India by an innings and 159 runs on the fourth day of the second Test to take 2-0 lead in the five-match series here at the Lord’s Cricket Ground on Sunday.
Expressing disappointment over the loss, Kohli said that he is not at all proud of the way his side performed in the match, while admitting that the England team displayed their hard work and dedication throughout the game.
“Not proud of the way we’ve played. First time in the last five Tests that we’ve been outplayed. We deserved to lose this game, the way we went about things.,” Kohli said in a post-match presentation.
Kohli further didn’t mince his words as he said the poor batting conditions could not be blamed for the defeat

“Can’t really think about conditions when you’re playing the game. You can’t sit and crib about these things. Sometimes the rub of the green won’t go your way. Even when the ball’s doing a bit, you have to pitch it in the right areas,” he added.
However, Kohli allayed concerns about his injury, saying he is confident of getting fit ahead of the third Test.
“I should be fine. Lower back issue, I’m confident I’ll be fine in five days time with a bit of rehab,” Kohli asserted.
It should be noted that the match was India’s first innings defeat under Kohli’s captaincy.
Resuming at the third day’s score of 356-7, England added 39 runs in the morning session of the fourth day before declaring their first-innings at 396-7 in reply to the Virat Kohli-led side’s lowly first-inning total of 107.
After England declared their first innings at 396-7 in reply to the Virat Kohli-led side’s lowly first-inning total of 107, the Kohli-led side failed to counter England’s bowling attack and suffered a dramatic collapse.

All-rounder Ravichandran Ashwin was the highest scorer for India with his unbeaten knock of 33.
England record wicket-taker Anderson scalped four wickets for 23 runs to finish with brilliant match figures of nine for 43. By bagging nine wickets, he also became the first player to clinch 100 Test wickets at Lord’s.
While Broad also finished with four wickets by conceding just 44 runs, Chris Woakeschipped in with two wickets to steer England to an innings victory over India.
The Kohli-led side will now have to win the third Test, beginning August 18 at the Trent Bridge, if they want to keep themselves alive in the series.

India Defeated Windies by 71 Runs in the Second T201