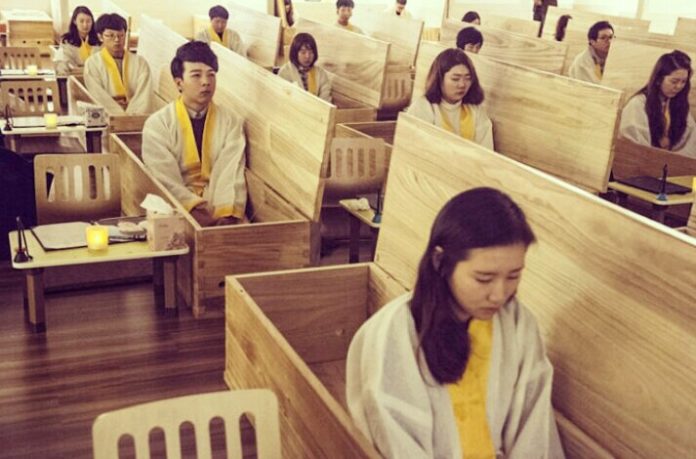 Have you ever experienced your own funeral. But Hyowon Healing Centre feels that you can improve your lives by stimulating death. This experimental life improving tricks happen in South Korea. More than 25,000 people have participated in mass “living funeral” services at Hyowon Healing Center since it opened in 2012.

Dozens took part in the event, from teenagers to retirees, donning shrouds, taking funeral portraits, penning their last testaments, and lying in a closed coffin for around 10 minutes.

South Korea ranks 33 out of 40 countries surveyed in the Organisation for Economic Co-operation and Development’s Better Life Index. Many younger South Koreans have high hopes for education and employment, which have been dashed by a cooling economy and rising joblessness.

“It is important to learn and prepare for death even at a young age,” said Professor Yu Eun-sil, a doctor at Asan Medical Center’s pathology department, who has written a book about death.

Jeong Yong-mun ,head of the healing centre said that funeral company Hyowon began offering the living funerals to help people appreciate their lives, and seek forgiveness and reconciliation with family and friends. Jeong said he is heartened when people reconcile at a relative’s funeral, but is saddened they wait that long.